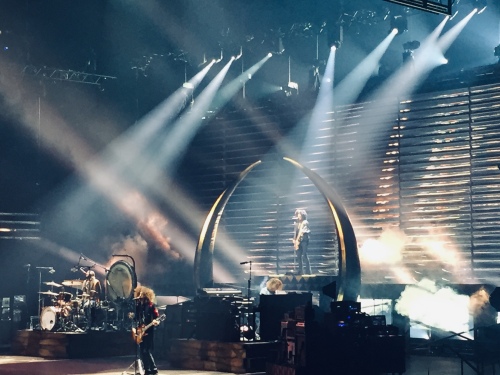 Lenny’s show in Helsinki on Saturday was amazing. He was full of energy, yet, so relaxed and so in the moment. He was walking in the stage and connecting sincerely to his audience. There was no rush whatsoever. He even asked the audience, “You are not in a hurry, aren’t you?” His voice was mesmerising. It was the same as listening to his studio recorded songs which means that he has such an authentic voice. His song, Here to love, was so touching with a choir on stage.

I bought seat tickets just to be sure that I can see. Except for Toto’s concert where I was stood in the first row, I struggled with height issue in concerts. I remember being squeezed among the crowd of a Green Day concert. And if not for the generous people infront of me during the Duran Duran and the Mariah Carey’s concert, I will not be able to see a thing, even those were seated tickets.

However during Lenny’s performance of Let love rule, I decided to go down. As luck would have it,  Lenny went down the stage too and kept on saying, “I want to see the people.” I saw the security near me looking all nervous. Lenny went across and up the hall. I knew that he will pass my way since the steps going up the stage was on the side where I was standing. People rushed to my side with phones ready while I decided to place my phone on my back pocket. I held out both my hand as he was coming close. I called softly, “Lenny”. And he reached his hand to me and I held it with both my hands. We were face to face. He was infront of me. He saw me. It was a very in the moment handshake. The people before me didn’t get handshakes while they stuck out one hand and phones on the other. I would not be in the moment and see him up close, if I was busy with my phone. I was the second to the last person who he shook hands with before climbing back the stage. The last person who was the guy next to me was not on his phone either. Well, talking about in the moment!